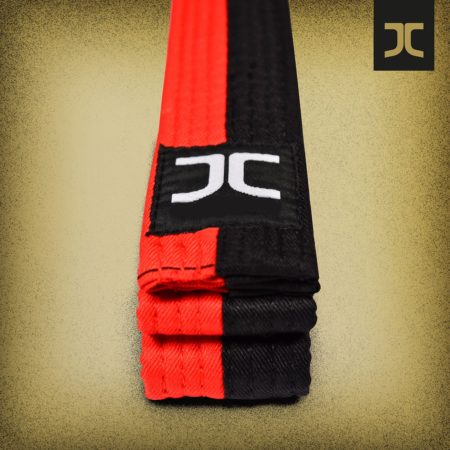 The taekwondo poom belt is a belt that is half red and half black. Many people do not understand the meaning of this belt so we will explain it.

In taekwondo you move in rank as you progress in your training and as you do, the belt color changes from white to diferent colors until you reach the seniority belt which is colored in black. To move from belt to belt you need to pass a series of tests in front of a panel of three judges that will qualifiy all the necessary aspects like technique, strenght control, among others.

Depending on the belt you might also have to pass a combat test in which you will show, in combat, all the learned skills. Now, there is also a minimum age for a student to reach the black belt which is 15 years old. When the student has not met this requirement, then he or she is required to wear the poom belt, where poom signifies “junior black belt“.

This means the studens has aquired all the necessary knowledge to become a black belt but lacks the maturity to be a full master.